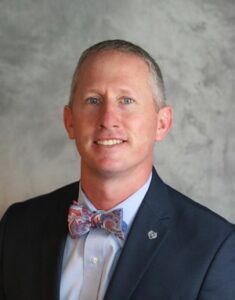 John Moseley has begun his sixth year as the Head Men’s Basketball Coach at Lincoln University in Jefferson City, Missouri. In addition to his basketball duties, John is also beginning his fifth year as the university’s Director of Athletics. During his time in Jefferson City, Moseley has led the Blue Tigers to four straight winning seasons for the first time in 40 years. His student-athletes have also performed consistently in the classroom, with the team earning a 3.19 GPA in the spring – which included one student-athlete graduating with a perfect 4.0 GPA in physics and mathematics.

On the administrative side, John played a big role in the university’s partnership with JC Parks which resulted in the construction of a wellness and recreation facility known locally as the LINC. The university has also undergone renovations to many of its athletic facilities.

Throughout his tenure in Jefferson City, John, his wife, Crystal, and his soon-to-be 10-year old daughter, Jillian, have been active in the local community. Their involvement has helped contribute to the growth of the Blue Tiger Athletics Club, Lincoln’s booster organization.